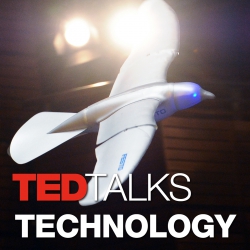 Some of the world's leading inventors and researchers share demos, breakthroughs and visions onstage at the TED conference, TEDx events and partner events around the world. You can also download these and many other videos free on TED.com, with an interactive English transcript and subtitles in up to 80 languages. TED is a nonprofit devoted to Ideas Worth Spreading.

Thousands of languages thrive across the globe, yet modern speech technology -- with all of its bene

Possible futures from the intersection of nature, tech and society | Natsai Audrey Chieza

a month ago 16 minutes

The innovations we need to avoid a climate disaster | Bill Gates

Meditations on the intersection of humanity and technology | Olivia Arthur

Documentary photographer Olivia Arthur has been exploring a new frontier: the evolution of the blurr

How AI can help shatter barriers to equality | Jamila Gordon

6 big ethical questions about the future of AI | Genevieve Bell

Artificial intelligence is all around us and the future will only bring more of it. How can we ens

Inside the massive (and unregulated) world of surveillance tech | Sharon Weinberger

What is a weapon in the Information Age? From microscopic "smart dust" tracking devices to DNA-traci

Biodiversity is the key to life on Earth and reviving our damaged planet, says ecologist Thomas Crow

People around the world are demanding clean air -- and cities are starting to respond, says electrif

How humanity can reach the stars | Philip Lubin

Could we exit our solar system, and enter another? Astrophysicist Philip Lubin discusses the awesome