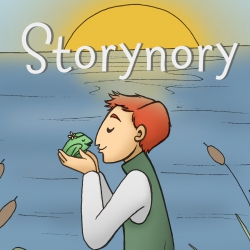 We bring you this sad but, we hope, beautiful story in verse. Orpheus the musician married Eurydice

Goldilocks and the Three Bears

A certain winner for children - how Goldilocks ate the Three Bears' porridge. We've added music with

Baloo the bear is teaching Mowgli the law of the Jungle. He learns how to be safe among the various

The Chinese Year of the Ox

An Ox is a large animal that looks like a bull, but he is generally patient, hard-working, and easy

The Chinese Years of the Animals

What animal are you? In Chinese astrology, each year is named after an animal, and if you are born i

For Velentine's Day, an ancient Romantic Story - Hero and Leander - two lovers seperated by a stretc

Sheer Khan the Tiger has come to the meeting of the wolf pack. He wants to depose the leader of the

a month ago 38 minutes

Arkela the leader of the wolves has been a protector of Mowgli, but he is growing old. Mowgli may h

a month ago 27 minutes

Father wolf presents Mowgli to the wolf pack asking them to accept him. But Sheer Khan the tiger dem

a month ago 28 minutes