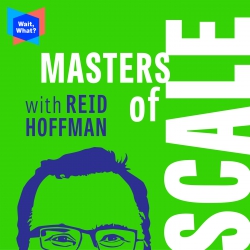 Masters of Scale with Reid Hoffman

Masters of Scale is a new podcast in which LinkedIn Co-Founder and Greylock Partner Reid Hoffman shows how famous founders take companies from zero to a gazillion. With original music and hilariously honest stories, the show sounds like nothing you’ve ever heard. It's also the first American media program to commit to a 50-50 gender balance for guests. Masters of Scale is a WaitWhat original series in association with Stitcher.

Frustration is an important signal: it indicates an opportunity, a problem to be solved. And if y

"It's 12 months of no meaningful revenue," says Alamo Drafthouse CEO Shelli Taylor. "And then las

With 75% of U.S. customers saying they'll soon be vaccinated, Delta is embracing a new phase, ope

86. Beyond Meat's Ethan Brown: How to teach your customer

The customer isn't always right. As the founder and CEO of Beyond Meat, Ethan Brown has spent yea

No one knows the fundraising game better than Mark Cuban, serial entrepreneur, investor, and star

a month ago 16 minutes

In recent months, business leaders have been pressed to take public positions on politics in ways

Rapid Response: Airbnb's Brian Chesky: "We died and were reborn."

Headlines last April predicted death for Airbnb. How could it survive a pandemic that stopped the